Sydney, Brisbane and Melbourne experienced their cloudiest week in at least four years (week ending the 4th of January 2021). Last week saw the first cyclone of the season Imogen developing in the Gulf of Carpentaria, feeding moisture into a deep trough lying through central Australia. The trough and tropical moisture combined to generate days of cloud, showers and thunderstorms for northern and eastern Australia.

La Nina is near its peak, which has well and truly brought cloudy and humid conditions for the eastern and northern parts of Australia. This has reduced rooftop solar for many capital cities in the NEM.

How cloudy was it during the week leading up to the 4th of January?

Sydney observed the least sunlight of all the capital cities of the NEM and it’s cloudiest week in seven and a half years. Averaging 1 hour and 3 minutes of sunshine per day in the week to 4th January (Figure 1), which is 7.5% of the total daylight hours (Figure 2).

Melbourne came in second to Sydney, averaging 5 hours and 20 minutes of sunshine per day during the same week (Figure 1), which is 38% of the total daylight hours (Figure 2). It has been 4 years since Melbourne has had a week this cloudy. 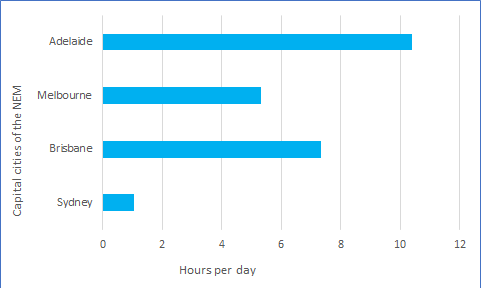 Brisbane observed an average of 7 hours and 20 minutes per day during this week, which has not happened in 5 years (Figure 1), which is 52% of the total daylight hours.

Finally, Adelaide was west of the inland trough, which meant that the southern city was clear and mostly sunny. Adelaide averaged 10 hours and 25 minutes of sunshine per day in the week (Figure 1), which is 74% of the total daylight hours (Figure 2). 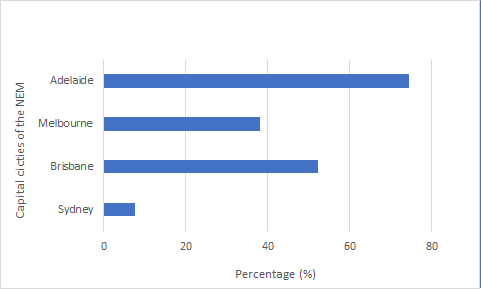 During Saturday the 2nd of January, low solar influx was forecast for much of eastern Australia (Figure 3) due to a cloud, showers and storms. Increased periods of cloud cover is typical during the peak of La Nina and highlights the need for effective solar and seasonal forecasts. Please contact us at business@weatherzone.com.au for more information.