A relentless band of heavy rain is falling over already flooded area in southeast QLD this morning, cutting roads, inundating homes, and forcing some residents to flee to higher ground.

A slow-moving upper-level trough interacting with a sustained stream of moisture-laden air from Coral Sea has caused widespread rain and flooding across QLD this week. Over the last 24 to 48 hours, the heaviest rain has become focussed over state’s southeast, where some places have received more than 400mm in two days.

Some of the standout rainfall totals up to 9am on Friday, May 13, included:

Below is an animation that shows the rain band slowly passing over southeast QLD during the last 24 hours. Areas of persistently heavy rain can be seen extending from the Darling Downs across to the Lockyer Valley and up towards the Capricornia and Wide Bay and Burnett districts.

With this heavy rain falling over a short period of time and onto already saturated ground, major flooding has developed in a number of rivers and creeks across southeast QLD. The red triangles on the map below shows which river-level gauges were recording major flood heights at 10am AEST on Friday.

Image: River level hights in QLD at 10am AEST on Friday, May 13. Source: Bureau of Meteorology

A number of Emergency Alerts have been issued across southeast QLD on Friday morning in response to the rain and flooding, which you can find on the QLD Government’s Disaster Management wesbite.

Unfortunately, more heavy rain will fall over southeast QLD on Friday as moisture-laden air continues to flow into a low pressure trough. The heaviest falls will occur between the Capricorina and South East Coast districts, where six-hourly falls of 100 to 160 mm are possible, on top of what has already fallen. 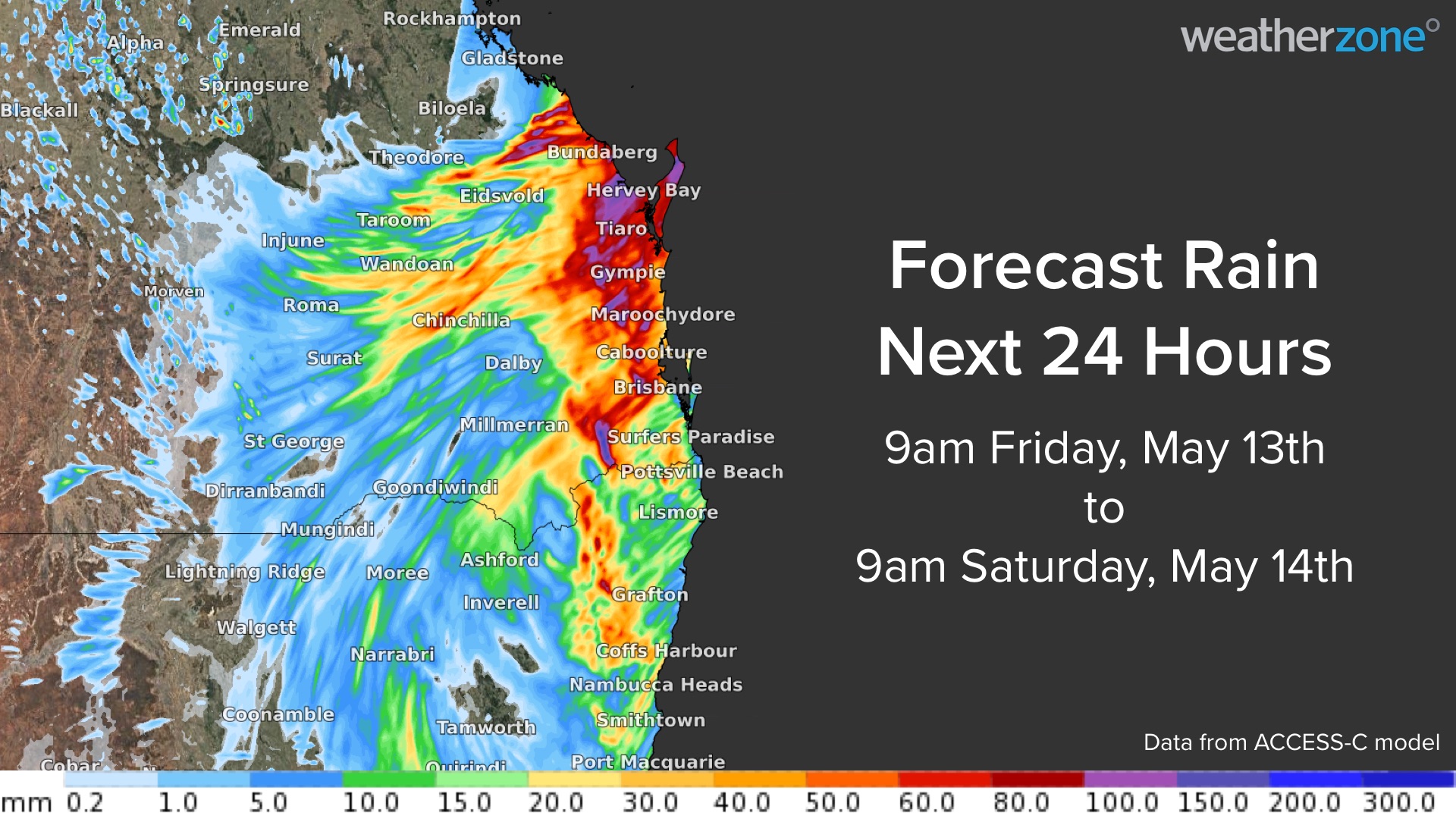 Image: Forecast accumulated rain during the 24 hours ending at 9am on Saturday, May 14, according to the ACCESS-C model.

As of 10am, major flood warnings were in place for the following rivers and creeks:

In addition to these major flood warnings, a number of minor to moderate flood warnings are also in place across QLD. Severe weather warnings have also been issued for heavy rain and dangerous surf in the state’s southeast.

Rain should ease for some areas of southeast QLD on the weekend, however, a lingering low pressure system could still cause locally heavy areas of rain. Be sure to check the latest warnings over the next few days for the most up-to-date information on this evolving system. For more information, please contact us at business@weatherzone.com.au.