Australia could soon be stuck between two wet-phase climate drivers, with a negative Indian Ocean Dipole imminent and new model data increasing the likelihood of La Niña later this year.

The IOD is an index that measures the difference in sea surface temperatures on either side of the tropical Indian Ocean. This large-scale phenomenon affects the weather and climate of Australia and other parts of the world, typically during the Southern Hemisphere’s winter and spring.

The IOD is in a negative phase when cooler-than-average water sits off the east coast of Africa and unusually warm water builds up to the northwest of Australia, near Indonesia. If this pattern persists for at least eight consecutive weeks, the Bureau of Meteorology will declare an official negative IOD event.

Sea surface temperatures in the Indian Ocean have been near or exceeding the negative IOD threshold for the last six weeks, and most models suggest that this will continue for at least the next fortnight. This means the BoM is likely to officially declare a negative IOD event during the first week of August. 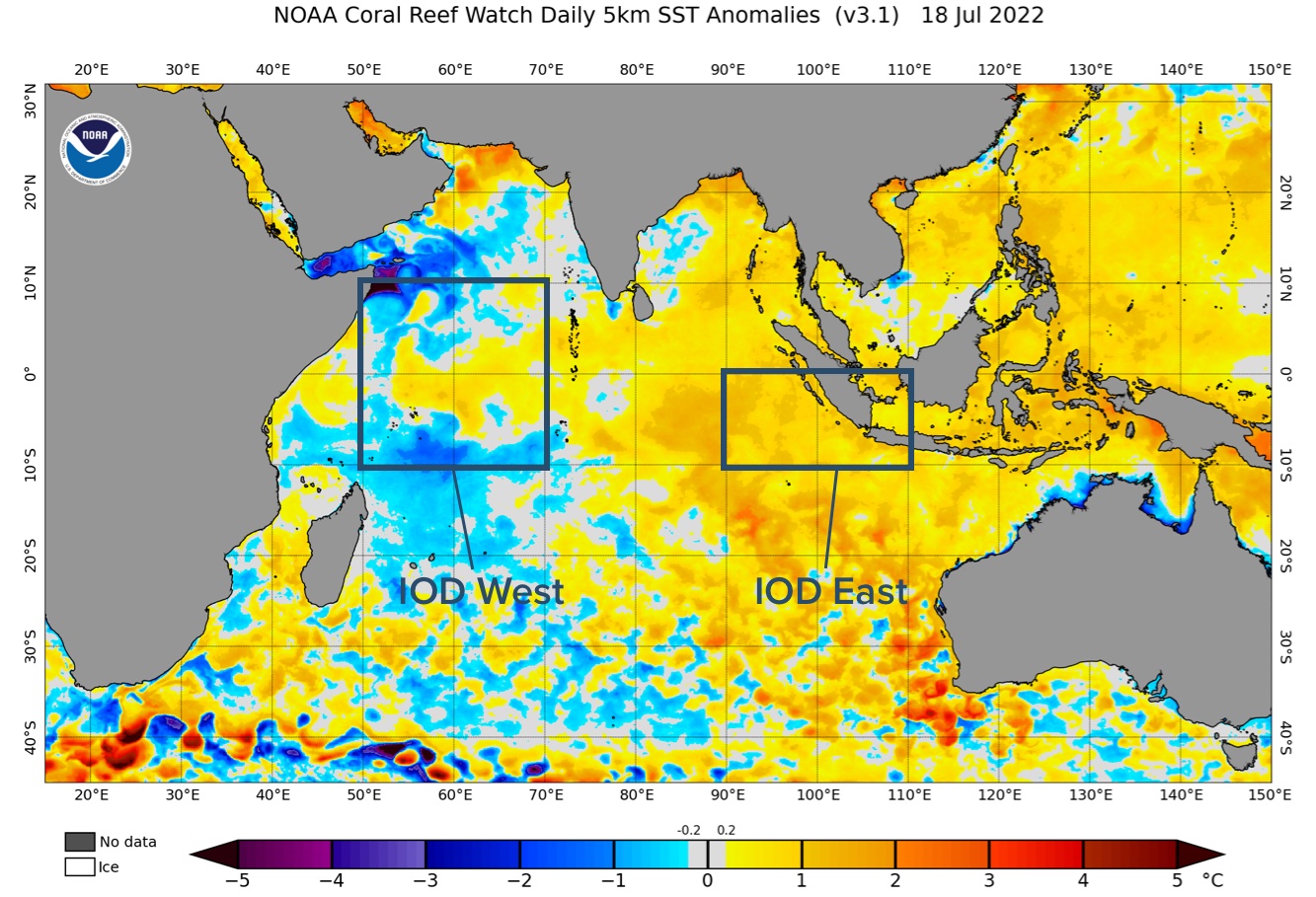 Most international forecast models suggest this year’s negative IOD should continue through the rest of winter and spring, before breaking down in early summer.

Negative IOD events typically increase rainfall over large areas of Australia during winter and spring, particularly over the country’s south and the southeast inland.

The Pacific Ocean is currently in a neutral state following two consecutive La Niña events over the last two years. This neutral state should persist until the end of winter, although there are growing signs that a third La Niña may develop later this year.

Four of the seven international climate models surveyed by the BoM predict that La Niña will redevelop by late-spring.

One of the organisations backing the return of La Niña in the second half of 2022 is the U.S. Climate Prediction Centre (CPC). Together with Columbia University’s International Research Institute for Climate and Society (IRI), the CPC issues two La Niña outlooks every month. One of these outlooks is produced by human forecasters and the other is purely model based.

Earlier this month we reported that the CPC/IRI human-based forecast had increased the likelihood of La Niña compared to the previous month’s outlook. Now, their computer model-based outlook has done the same.

The graph below shows the forecast likelihood of La Niña according to the CPC/IRI’s model-based forecasts from this month (July) and last month (June). The probability of La Niña has increased between these months by a whopping 10 percentage points, from 60 to 70 percent, for the Southern Hemisphere’s spring. 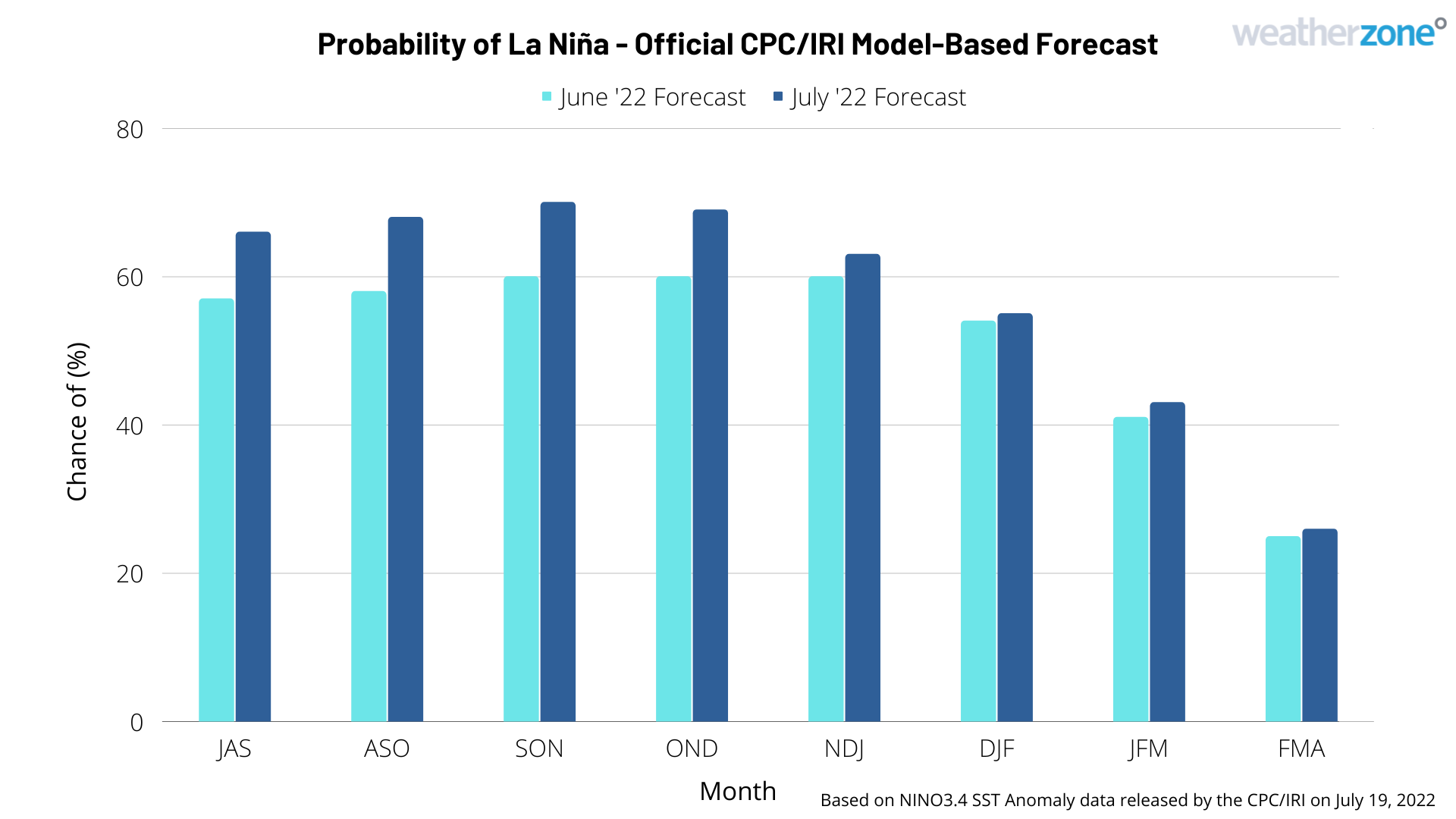 Image: Probability of La Niña during the next eight months, based on the CPC/IRI model-based forecasts issued in June and July 2022. Source: CPC/IRI

If La Niña does redevelop later this year, most forecast models suggest that it may be short-lived and break down early next year.

Like the negative IOD, La Niña increase the likelihood of above average rainfall over large areas of Australia. When they both occur at the same time, virtually all of Australia can expect to see more rain than usual. 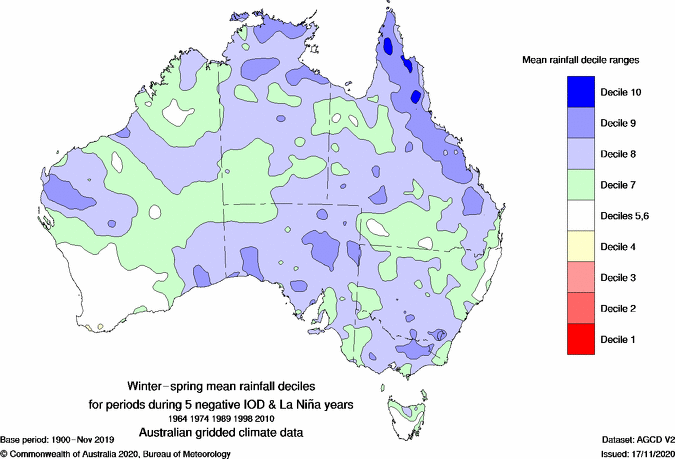 Image: Observed mean rainfall deciles during five years that featured both La Niña and a negative IOD at the same time. Source: Bureau of Meteorology.

For more information on our outlooks, please contact us at business@weatherzone.com.au