A lengthy investigation is underway in the U.S. following a potentially record-breaking outbreak of tornadoes in the country’s mid-Mississippi Valley late last week.

Multiple tornado-producing thunderstorms tore across several states in the southeast U.S. on Friday, December 10, into the early hours of Saturday morning.

Amid this devastating barrage of tornadic storms was a single supercell thunderstorm that travelled more than 200 miles (over 322 kilometres) across four separate states. This intense thunderstorm, which has been nicknamed the ‘Quad-State supercell’, showed signs of rotation on radar for around 11 hours and lofted debris around 10 kilometres into the air.

Comparison of the 1925 Tri-State tornado and the storm that produced at least one tornado striking communities including Monette, AR, and Mayfield, KY.

Regardless of whether or not it was a single tornado, the longevity of this storm will likely be studied for decades to come. pic.twitter.com/NWAqDodife

If it were in Australia, this storm would have travelled from about Dubbo to Sydney or Adelaide to Mildura.

It is now certain that this long-lived storm produced at least one destructive tornado. However, it is unclear whether this was a single tornado that remained on the ground the whole time, or multiple tornadoes that spawned from the same parent thunderstorm.

Dawson Springs, Ky is 70 miles away from #Mayfield and was also devastated by the #Tornado #WX pic.twitter.com/kBwBxcxURi

Specialist meteorologists from the U.S. National Weather Service are conducting surveys of the damage left by last week’s tornadoes. This investigation will take some time to determine how many tornadoes there were, how long they lasted, and how high they ranked on the six-tiered Enhanced Fujita scale of tornado intensity.

Preliminary survey results suggest that damage in Mayfield, population 10,000, was caused by an EF-3 tornado with a width of three quarters of a mile (1.2 klilometres).

Latest info from NWS Paducah regarding the #Mayfield Tornado. It is at least an EF-3 with a width of 3/4 of a mile. Because it appears this may be higher end tornado (EF-4 or EF-5), they are sending experts and engineers Monday to help with the survey.https://t.co/rwPT6HyYAN pic.twitter.com/dychqBfN1v

Authorities are also still searching through debris trying to figure out how many deaths were caused by the tornadoes.

It’s possible that last week’s Quad-State Supercell will challenge the existing U.S. and world record for the greatest distance travelled by a single tornado, which currently sits at 219 miles (352.4 km) from the Tri-State Tornado in 1925.

While tornadoes can happen at any time of year in the U.S., they are more common between April and July, when the ingredients for tornado-producing storms are in abundance. December is statistically the quietest month of the year, averaging about 24 tornadoes across the entire U.S. 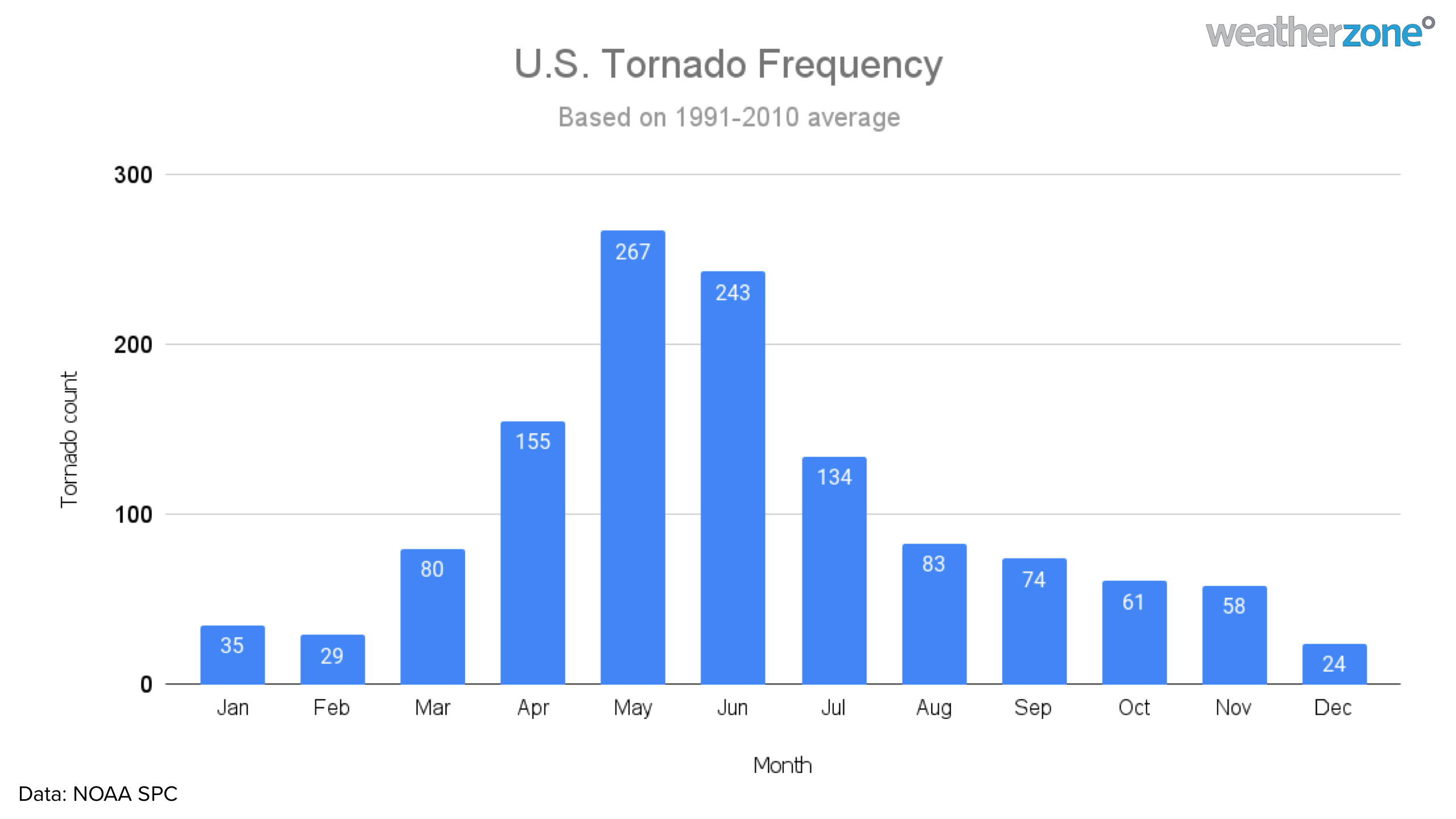 Image: U.S. tornado climatology based on the observed tornado activity between 1991 and 2010. Data sourced from NOAA/SPC.

Last week’s out-of-season tornadoes were produced by an unusual set of conditions that involved record-challenging warm and moisture-laden air from the south clashing with much colder air from the north.

This large contrast in temperatures, which was unusually strong for December, helped create instability in the atmosphere, while the low-level moisture also helped fuel the thunderstorms.

Another factor that likely contributed to last week’s tornado outbreak is the current state of the Pacific Ocean. La Niña has been shown to increase the frequency of tornado events in the central-Mississippi Valley region of the U.S. during the meteorological winter (December to February).

Weatherzone’s own Dangerous Thunderstorm Alerts (DTAs) are high precision alerts which warn our clients of imminent severe weather up to thirty minutes in advance.

DTAs work by measuring the frequency of lightning flashes, which directly correlate with the severity of the weather in the form of heavy rain, damaging winds, large hail, or tornadoes.