Several days of heavy rain, blustery winds and dangerous surf are about to hit eastern Australia, with flooding a risk in parts of QLD and NSW during the opening days of July.

Tropical moisture feeding into a broad and slow-moving upper-level trough will produce a prolonged period of wet weather in eastern over the coming week.

Rain will start to increase over parts of the NT, QLD and NSW from Friday as a cloudband spreads over eastern Australia from the tropics. Moderate to heavy falls are possible in northwest QLD and the northern inland of the NT beneath this thick cloudband. 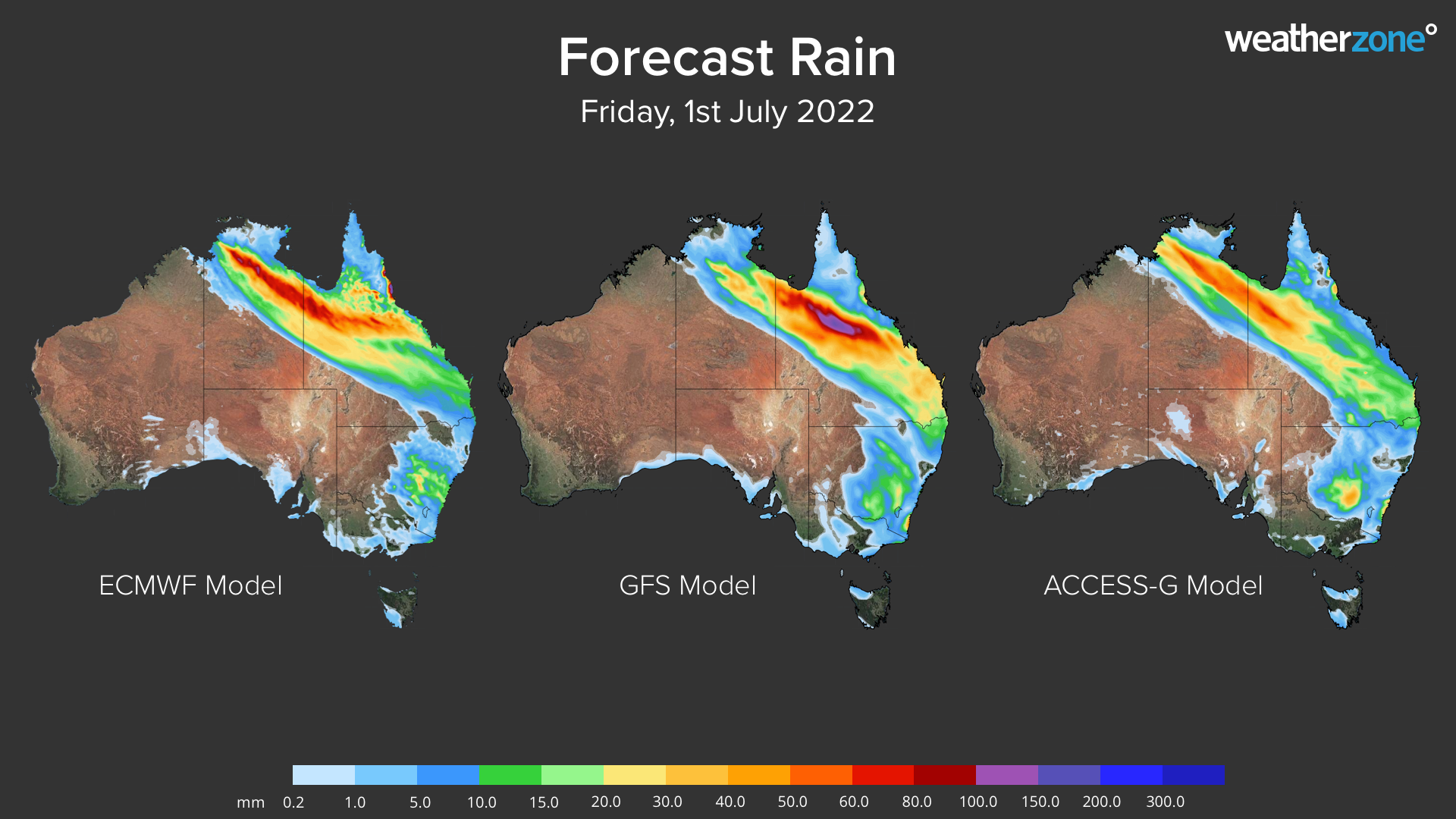 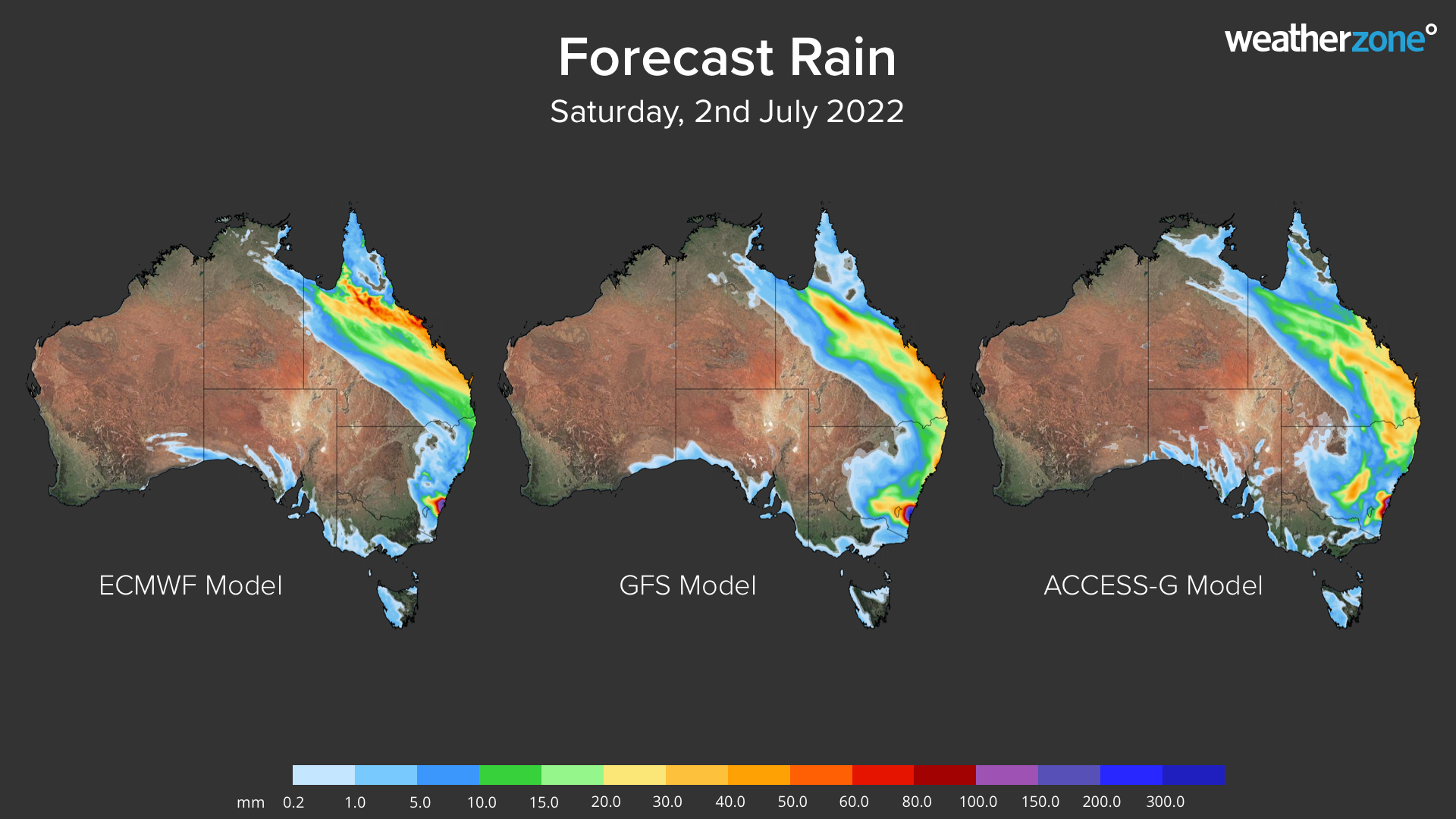 Rain should continue over eastern QLD and large areas of eastern and central NSW on Sunday. Heavy rain is expected to fall over the southern or central coastal districts in NSW as a low pressure system deepens in the Tasman Sea, possibly delivering more than 100mm of rain to a similar region to Saturday. This heavy multi-day rainfall is likely to cause flooding. 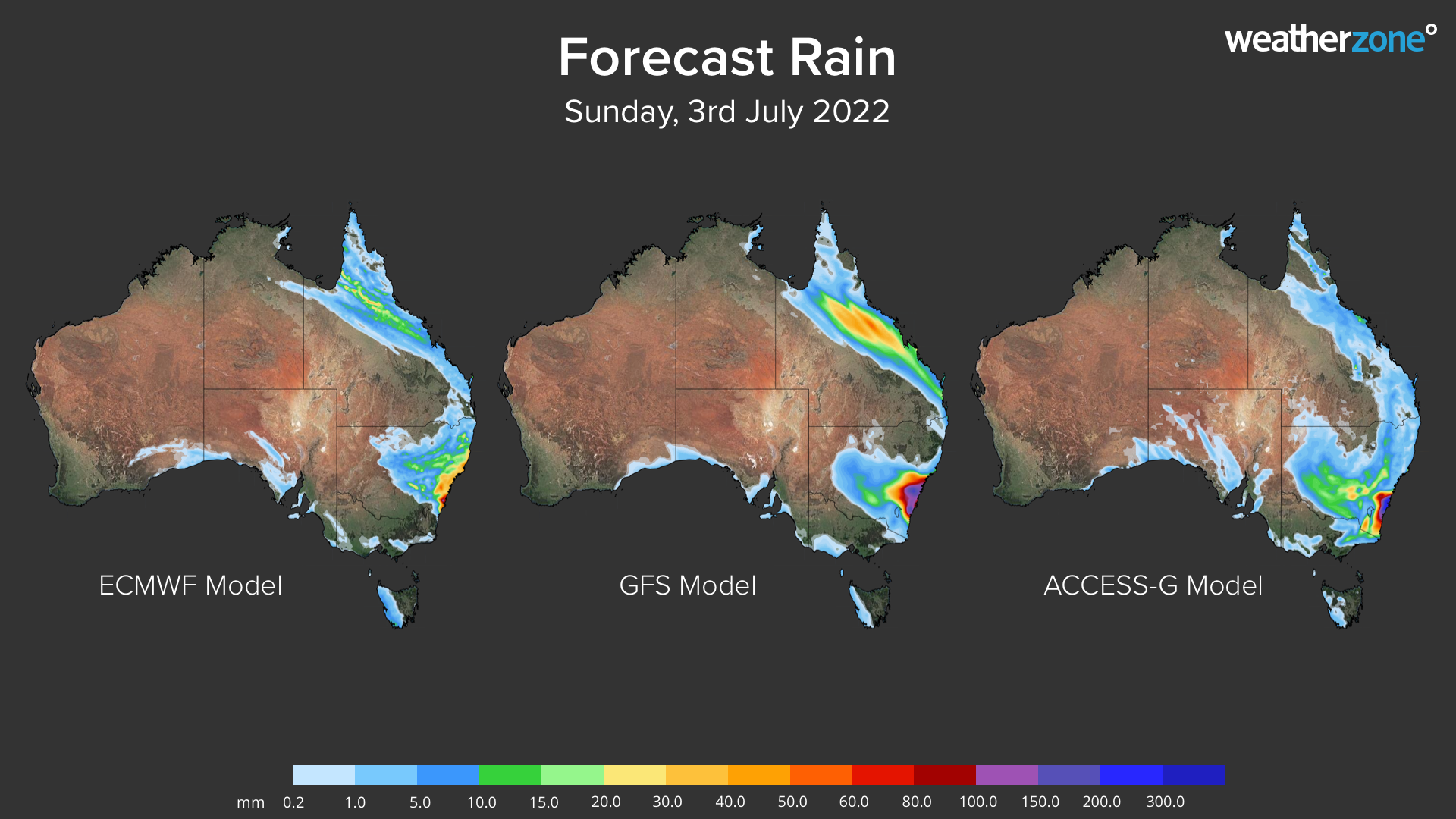 On Monday, rain should continue to fall over QLD’s northern and central coastal districts with a lingering low pressure trough. There is also likely to be further rain over NSW, however the location and strength of the Tasman Low becomes uncertain from Monday, which makes it hard to predict where and how much rain will fall. The maps below shows that the focus of heavy rain could be anywhere between the southern and northern coasts in NSW, with some showers also likely to extend west of the ranges. 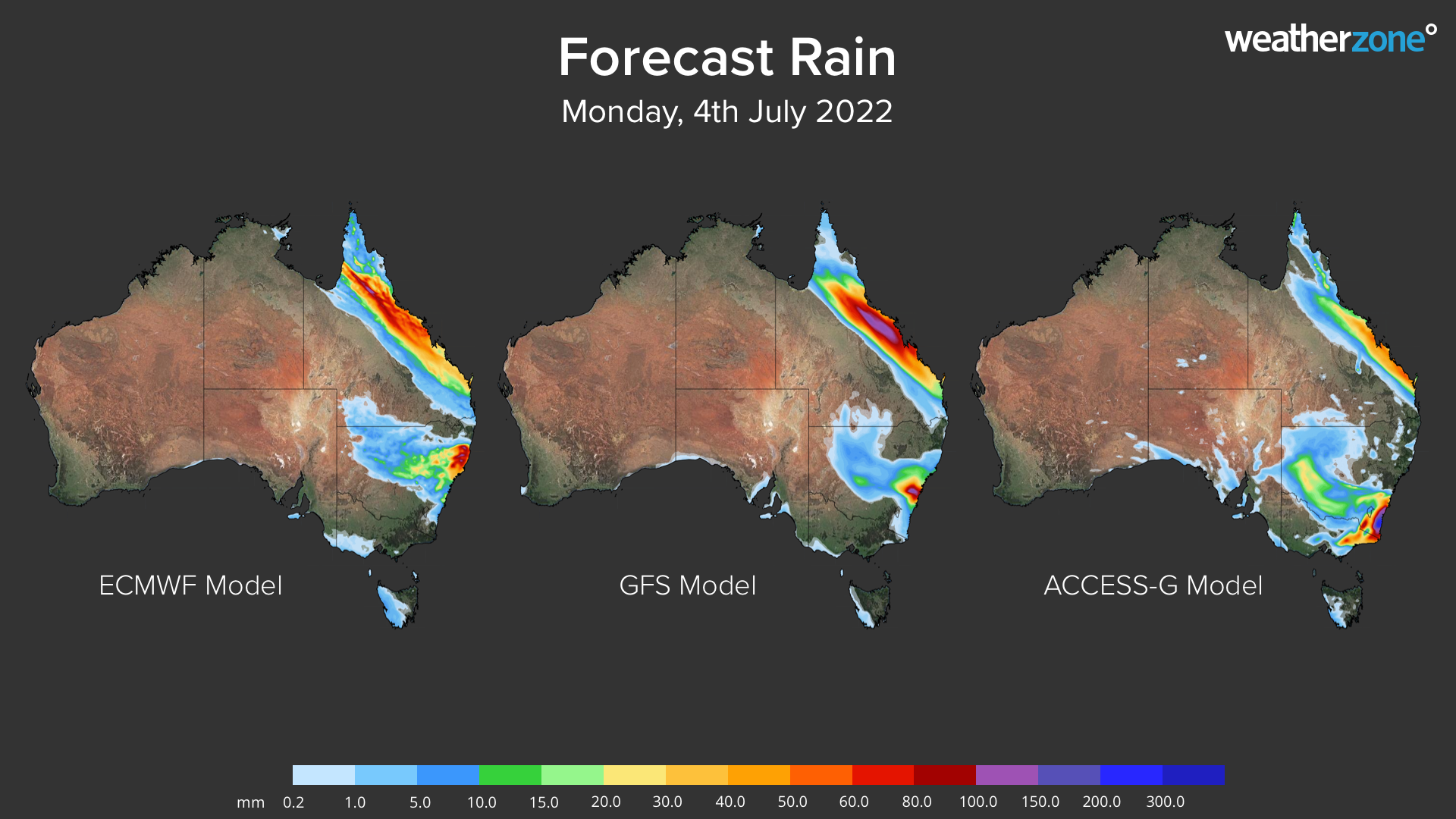 Most forecast models suggest that rain will continue to affect some eastern parts of NSW and QLD on Tuesday and Wednesday. However, the model uncertainty this far ahead makes rainfall predictions hard to pin down.

Looking at the next 8 days as a whole, widespread rain is expected to affect a large area of eastern Australia from about Cooktown to Batemans Bay. Accumulated rainfall totals of 100 to 200mm are likely in some parts of this region, with isolated falls above 300mm possible. This rainfall is likely to cause flooding in some areas, most likely in central QLD and southern NSW. 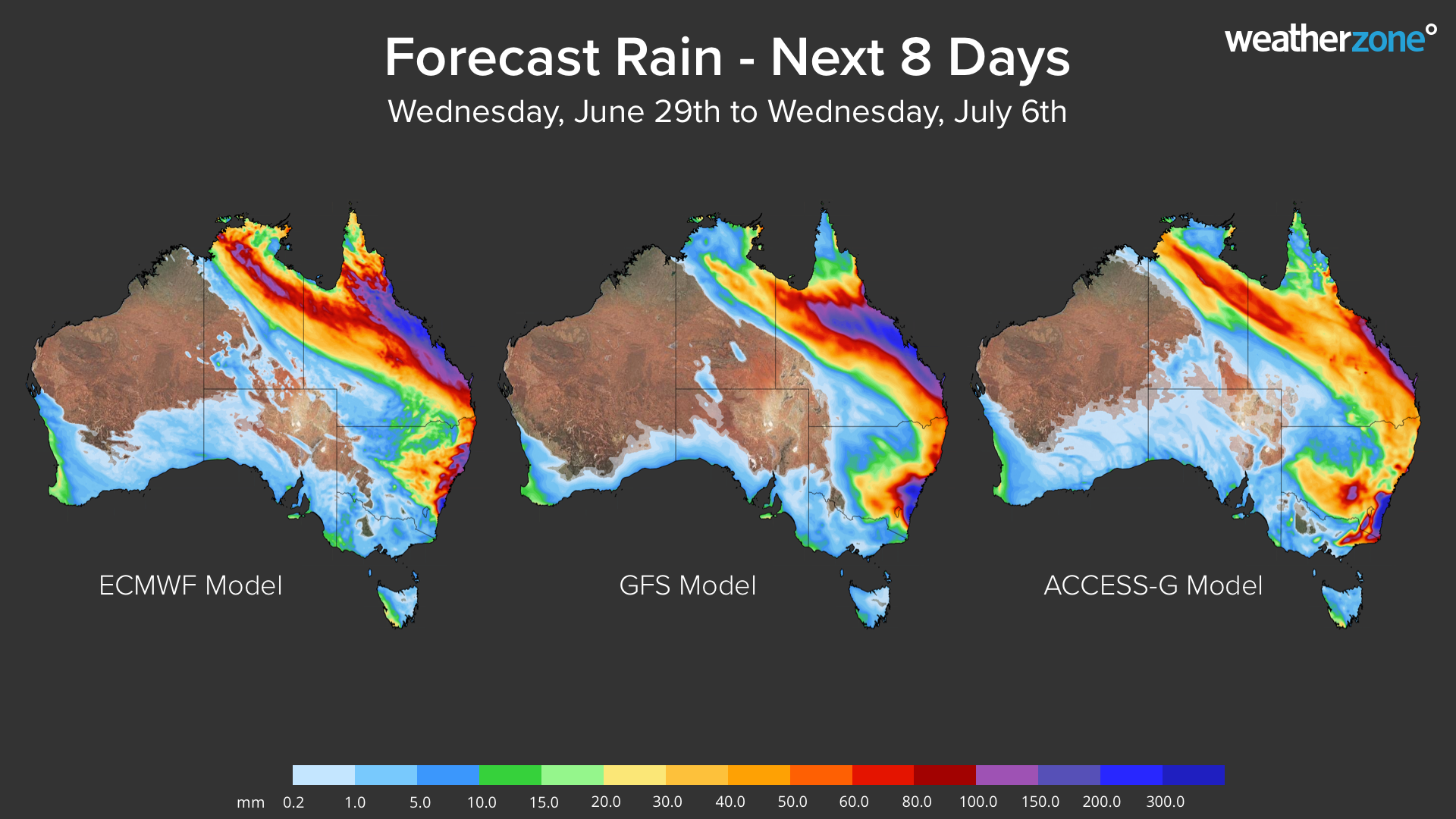 This weather event is also likely to produce strong and potentially damaging winds along the NSW coast and ranges from this weekend into early next week, most likely near and to the south of the developing low pressure system. These winds may prompt warnings on land and over water, and will also generate big waves in the coastal zone.

Communities and industries in eastern NSW and QLD should stay up to date with the latest forecasts and warnings over the coming week, particularly from Saturday onwards. Real-time weather briefings give you instant access to our meteorologists, providing a competitive edge when severe weather is imminent or unfolding. For more information, please contact us at business@weatherzone.com.au.