Widespread and heavy rain could spread over a large area of QLD next week, possibly challenging records in some parts of the state.

Several forecast models are predicting a prolonged period of rain over QLD during the next 10 days, which will include several days of intense rainfall and flooding mid-to-late next week.

The map below shows that some computer models are predicting heavy rain over a broad area of QLD during the next 10 days. 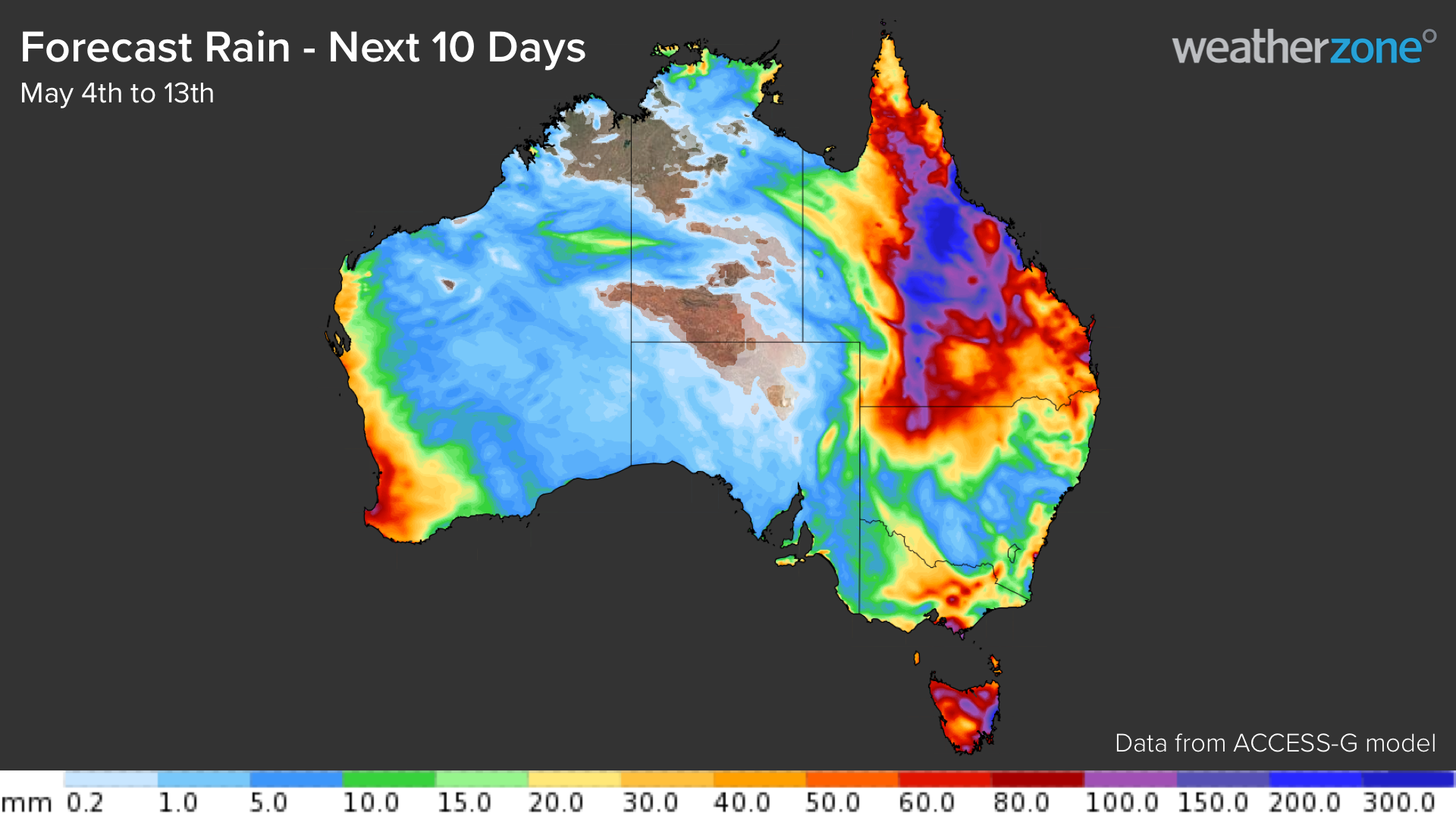 QLD’s impending deluge will be triggered by a series upper-level troughs and lows passing over Australia during the next 10 days.

Upper-level troughs and lows are concentrated pools of upper-level cold air and wind that make the atmosphere unstable and produce a dangerous mix of weather near the ground, typically including heavy rain, powerful winds and thunderstorms.

The first upper-level low will cross southeastern Australia between now and the weekend, causing showers and a few thunderstorms over central and eastern QLD.

A second, weaker upper-level trough will then drift over eastern Australia on Sunday and Monday, causing showers to redevelop across central, eastern and northern QLD.

Next week, another upper-level low is expected to drift across central Australia on Tuesday and Wednesday before pushing further north and passing over QLD on Thursday and Friday. This upper-level low is expected to cause the heaviest rain in QLD, with several days of intense rainfall possible over a large area between Tuesday and Friday. However, the position of the low is uncertain, and this will determine where and how much rain falls. 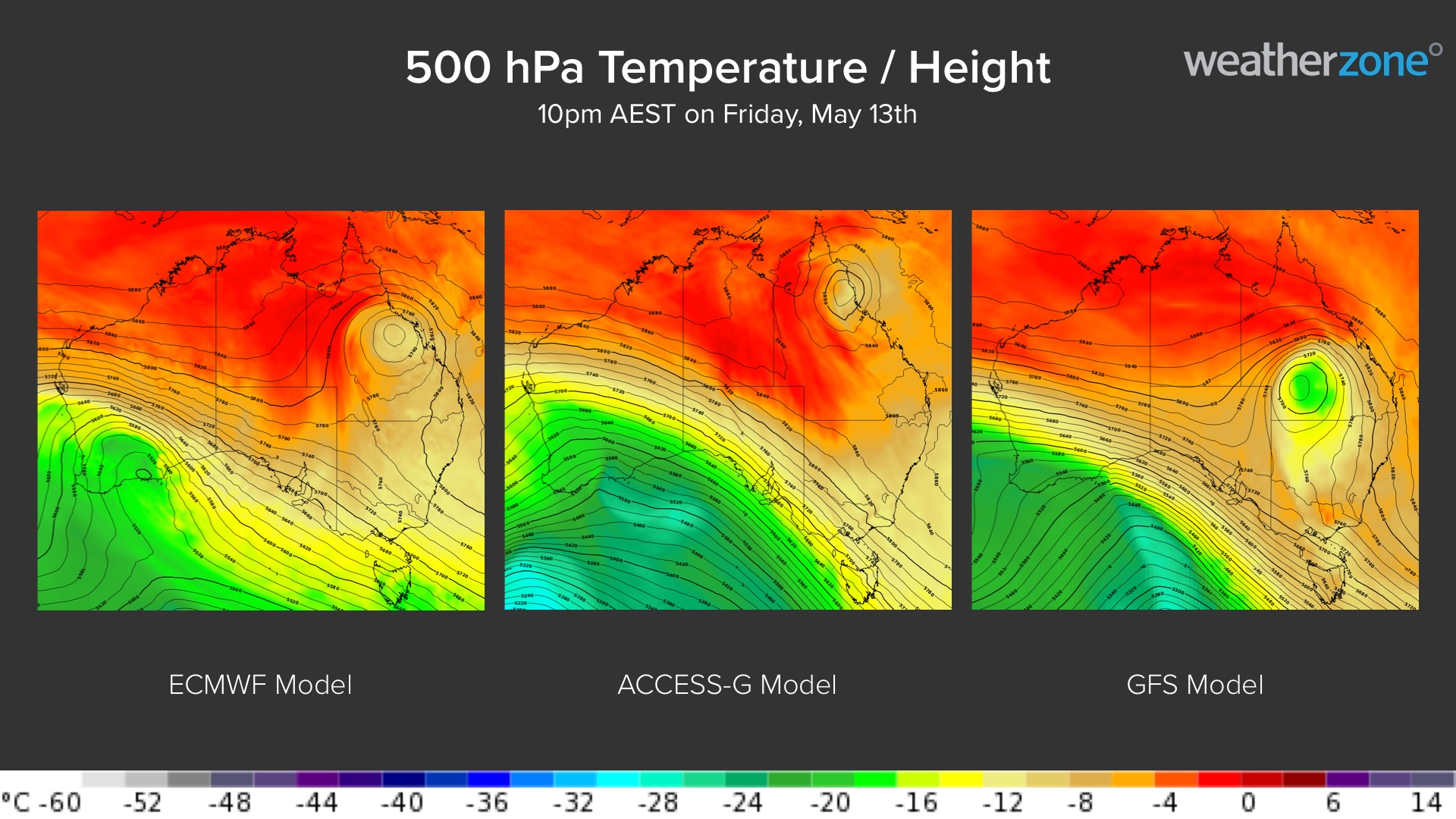 Image: Forecast 500 hPa temperature and height at 10pm AEST on Friday, May 13th, showing uncertainty in the predicted position of the upper-level low over QLD.

There is potential for several hundred millimetres of rain over multiple districts in QLD during the next 10 days, with the heaviest falls likely to occur mid-to-late next week. Some areas of Central West QLD that usually see about 20 to 40 mm in May could pick up more than 200 mm in a few days.

It is important to point out that there is some uncertainty regarding where and how much rain will fall from these systems. The maps below show how much rain is being predicted by three different computer models over the next 10 days. 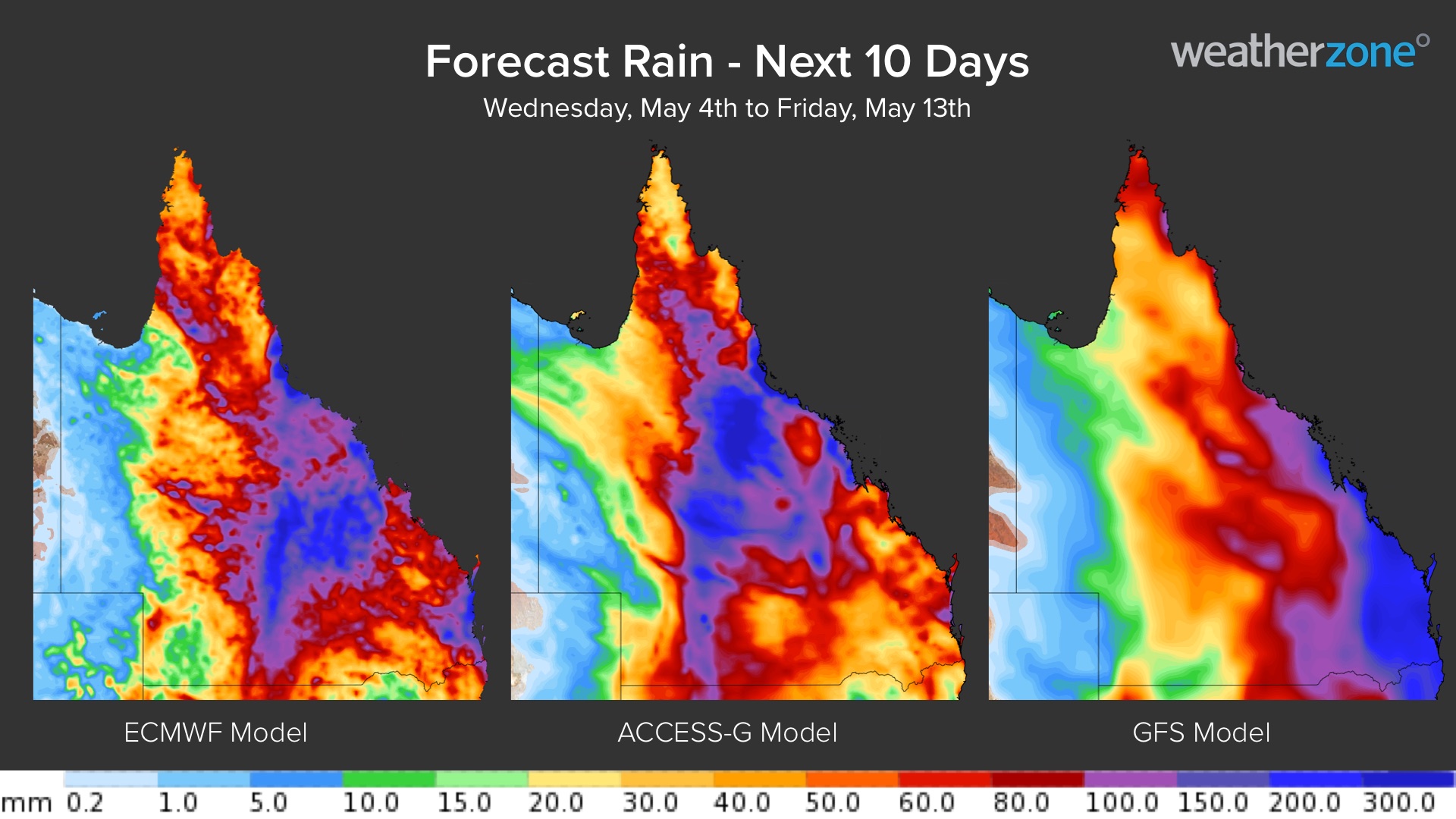 Some areas of QLD could see 100 to 400 mm of rain over the next 10 days, most of which will fall next week. There is potential for daily totals to exceed 100 mm in some places, which could cause flash and riverine flooding.

This is going to be a very dynamic weather event and forecasts are likely to change from day-to-day as more accurate model information becomes available. Be sure to keep a close eye on the latest forecasts and warnings next week if you live in QLD. For more information on Weatherzone’s heavy rainfall forecasting, please contact us at business@weatherzone.com.au.